Hello everyone welcome to the launch of the Tall Tales of the Aerona Temple blog! My name is Kathryn Hicks, and I am the director and creator of Tall Tales of the Aerona Temple. It is a 360° animated film that focuses on a Sasquatch who stumbles upon an ancient evil that threatens the prosperity of his homeland. It will take place in an underground temple created by the main character’s ancestors. My goal with this film is to make a pilot for an eventual series of 360° or possibly VR animated films. This series will focus on a cryptozoology world, that would eventually explain how cryptids got to Earth. It would start with the Sasquatches and branch out to other monsters.

On June 99 talented individuals and myself were invited out to the headquarters of Oculus: a virtual reality company owned by Facebook, for the weekend to be a part of their VR developer program called Oculus Launch Pad. After that program, all the people who attended worked on their VR / 360° projects for the next twelve weeks for a chance to receive funding for their projects.

Unfortunately, due to Hurricane Irma, I was unable to submit my project for Launch Pad, but I continued to work on the film. These past few weeks I have been recruiting, and I am currently seeking more animators and motion graphics artists.

The other day I gave a presentation for my film about what I expected for motion graphics artists. I want motion graphics artist to treat the end credits like another mini 360° experience, instead of an afterthought. Most end credits that I have experienced in VR/360° I can either barely read or just want to take off the headset once it’s over. I feel like end credits should draw attention to the team that put together the final product. On my presentation, I created moods and references, and have been inspired by Atlantis: The Lost Empire, Oculus Story Studio’s Dear Angelica, Indiana Jones Adventure Ride, and the Revenge of the Mummy Ride. In my environment, I have wall reliefs that will light up, and I want the motion graphics artists to interpret the wall reliefs in a 360° setting that utilizes depth of field, size, and scale efficiently. 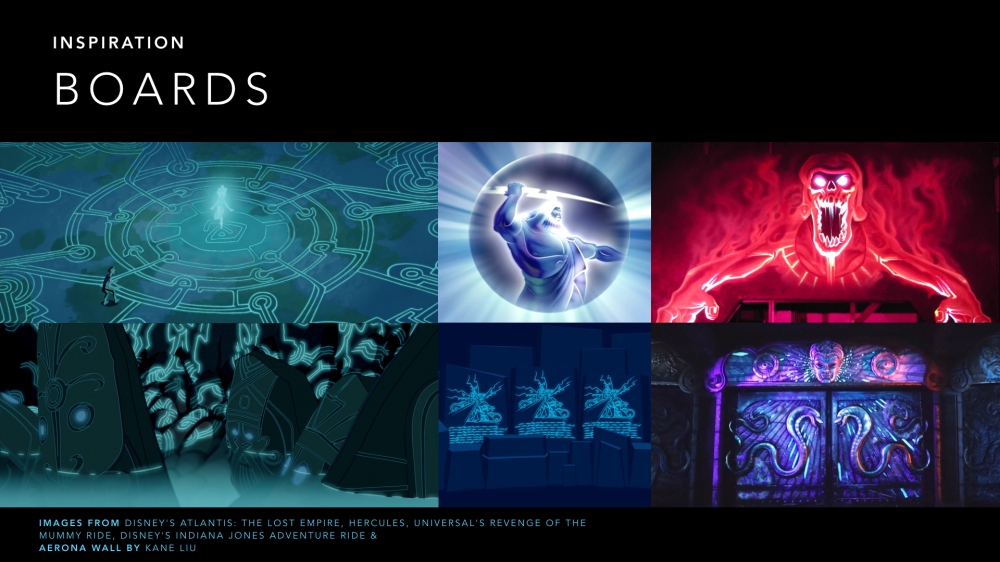 It will provide a connection between the audience and the character’s feelings of being trapped in a cave. The pilot will focus on a Sasquatch that accidentally falls into an underground temple while training in the woods. What he doesn’t know is that there is an ancient creature trapped in the cave along with ancestral presence. He must find his way out of the cave before something finds him. This pilot will be approximately three and a half minutes long and will be animated Autodesk Maya; 3D software used for animation, modeling, lighting, and rendering, then exported into Unreal Engine; real-time rendering engine used to build games. It will also utilize 2D effects.

I choose VR / 360° because it gives the audience a greater sense of immersion and it will allow individuals to feel trapped and vulnerable like my Sasquatch Zannis is in the cave. I want my audience to feel like they are placed in a 2D environment. I want to combine traditional hand-painted looking backgrounds in a 3D space. I believe something interesting happens when you merge the two in VR.