So I want to talk about my story process. Hopefully, this will be an educational or introspective process for people interested in developing 360° / VR films. Initially, this project featured two environments and three characters with several action sequences. The first environment would be held in a forest similar to the redwoods in California. This would be the training grounds for the protagonist Zannis and his mentor Chayton, both of whom are Sasquatches in a cryptozoology world. In this version of the story, Zannis would be in the midst of his training in the forest. By accident, he would fall through to an underground passage, leading him into an underground temple. From there, Zannis would unknowingly unleash the Kaga, an ancient shadow demon that had been imprisoned for centuries.

After receiving feedback from fellow students, I thought it would be best to trim this story down, focusing on one environment and two characters: the underground cave, Zannis, and the Kaga.  When I initially worked out my story in a 3D environment, I kept on thinking about it from a 2D film perspective. I had problems trying to utilize my character in that space. As a result, I was putting Zannis in the least engaging positions – as my approach had been confined to a 2D dynamic. To remedy this, I did a block map to figure out where the characters were on the page in contrast to a rough environment. I created what I called “view boundaries” and “character boundaries.” These terms defined functions that were similar to film language shots, such as a close-up or a medium shot. I wanted to make sure my characters stayed within the confines of my environment’s view boundary. 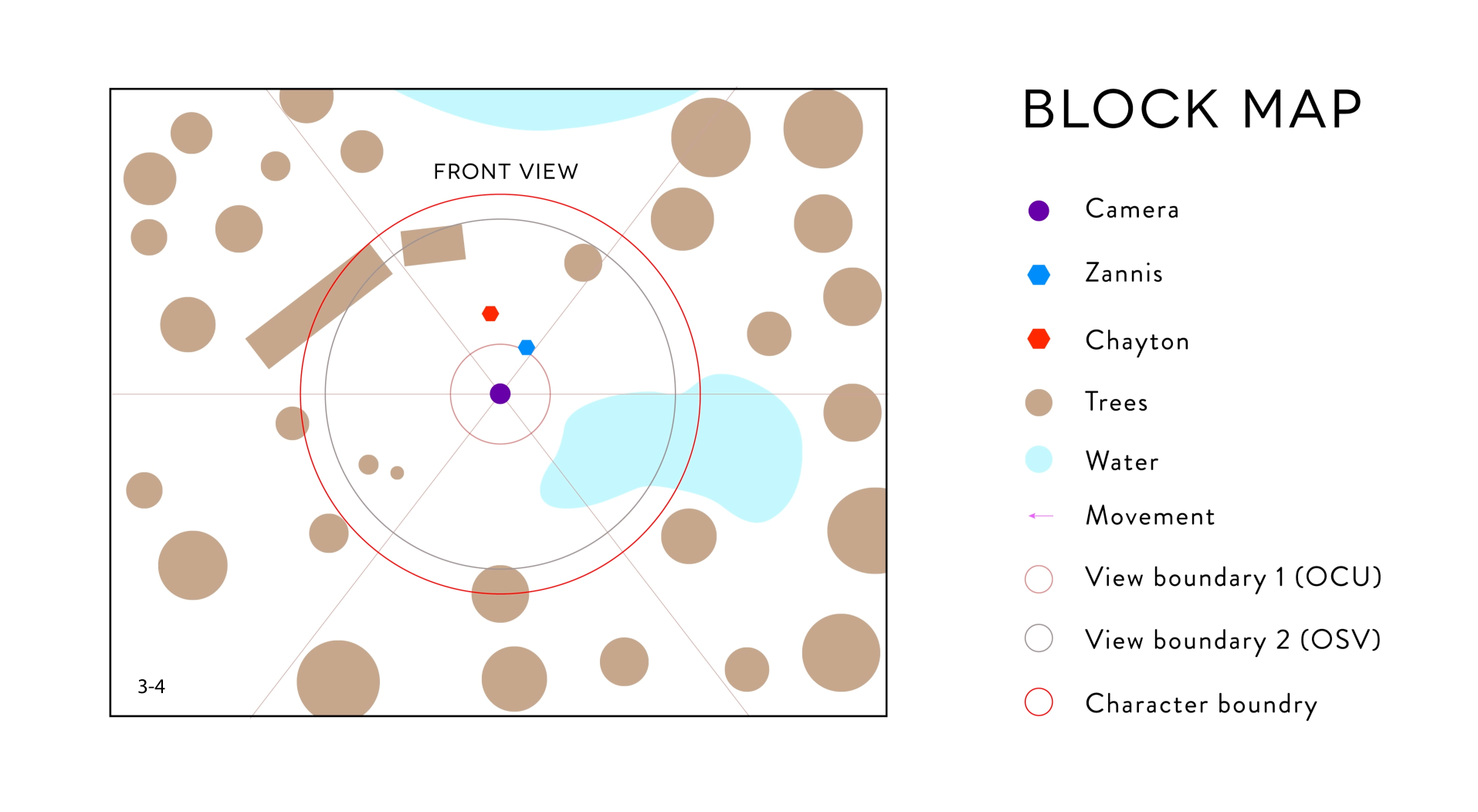 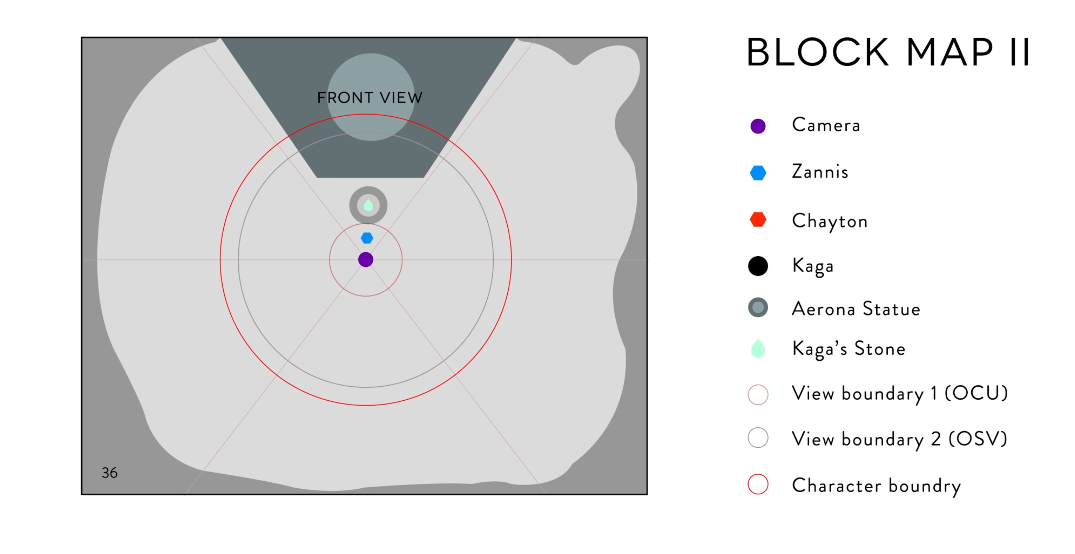 Once I had begun playing around with this, I had two storyboard artists create shots from this process. However, even though this is helpful to the animators, I feel like it hurt me in the long run. I continued on thinking about this film as being composed of several shots. When I did the first 3D animatic, my rough environment was too big and made the characters feel small and less intimate. Testing continued, and I decided to make the environment smaller and make the characters come closer to the camera.

My references have included theme park rides, such as The Wizarding World of Harry Potter, The Mummy, and The Transformers Ride at Universal Studios Orlando. I also reference the 360 film Invasion by Baobab Studios. All of these references reminded me to keep the characters fairly close to the camera during integral scenes in my film. For the final previs, I decided to have my character move through the scene, but do not stay too far away from the camera for too long. I made the environment smaller –  housing five statues that reference cryptozoology. I will utilize these statues as props for the film. 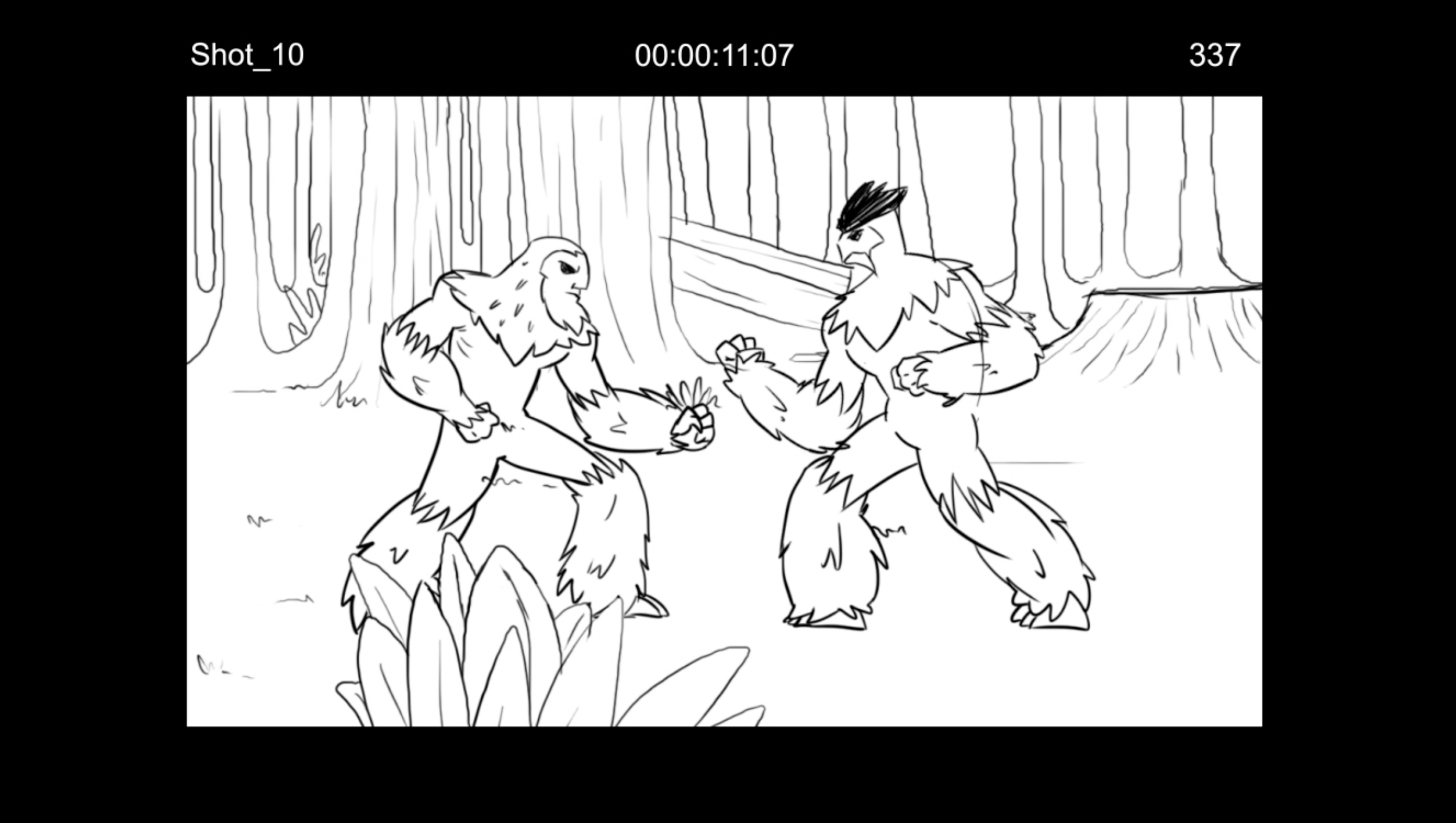 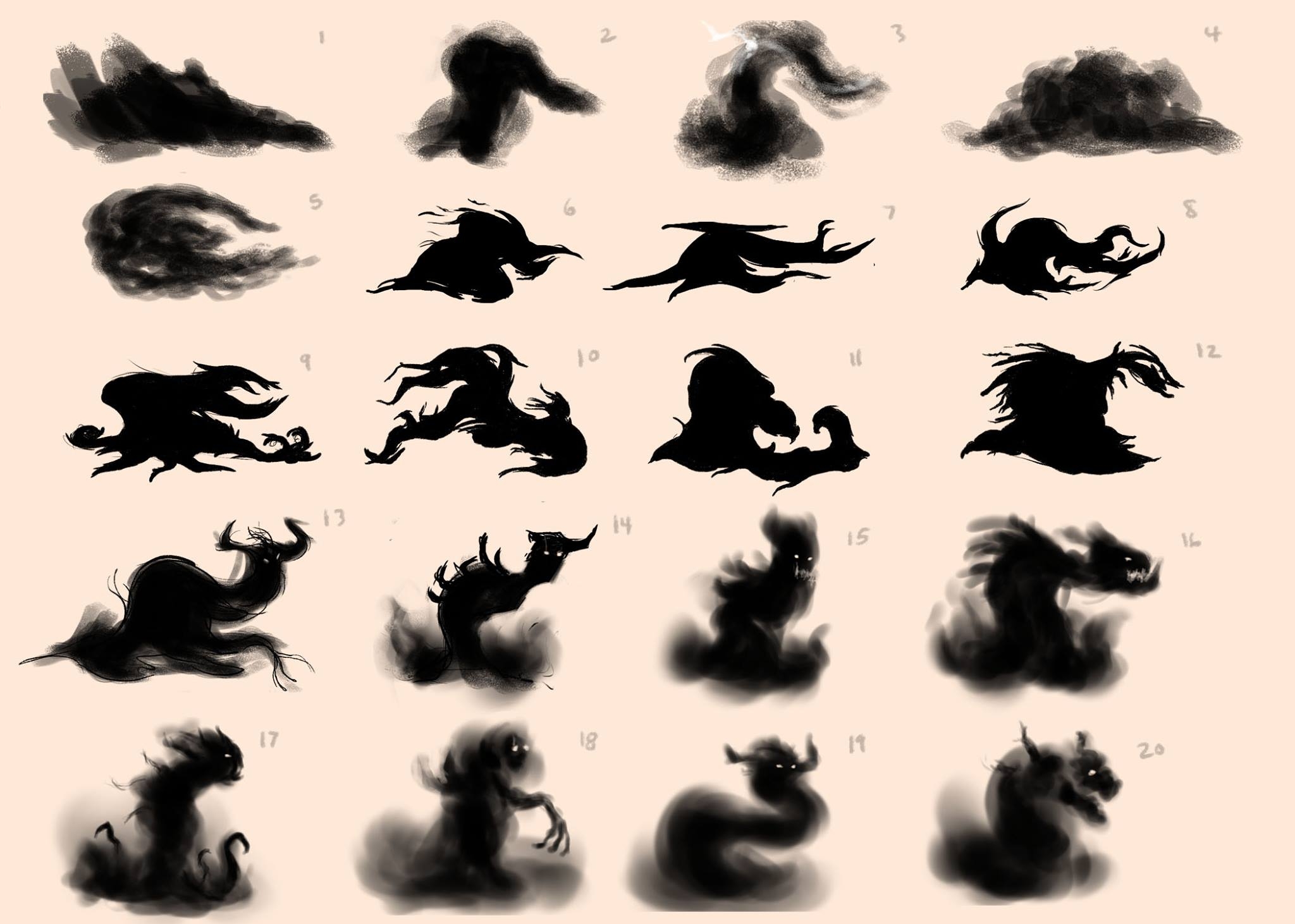 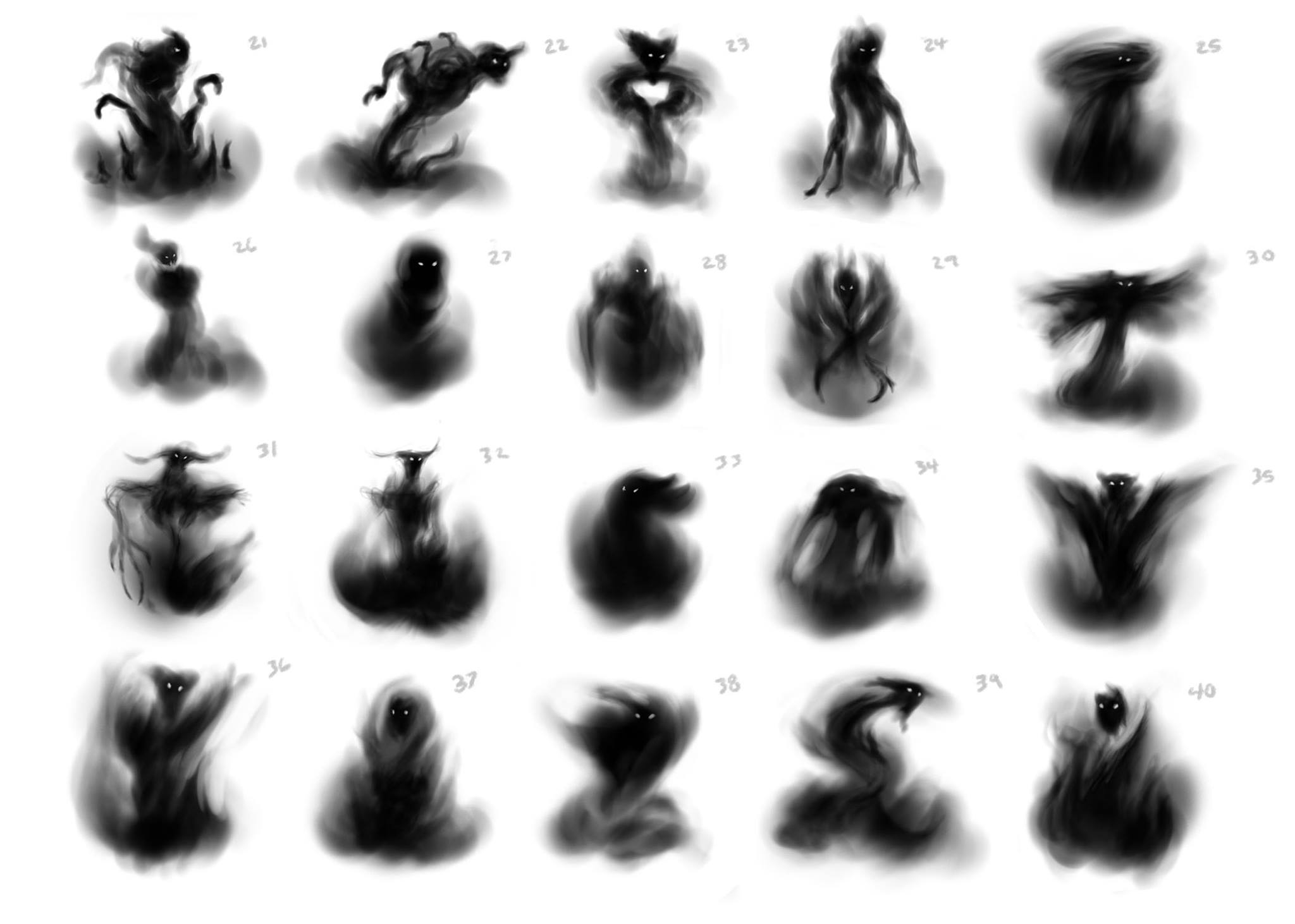 The beauty of VR/360° films is that you have to continually test things out even when you think a scene looks right. As I mentioned before that I referenced theme parks which I find to be a fantastic reference for VR / 360° projects. If you are near a theme park or are going to one, I would advise just walking around, possibly even watch how people interact with objects/people that are apart of the experience. Go on story-based rides and observe where they have placed objects and position of your cart to essential characters and things. I think theme parks are very similar to virtual reality, in the aspect that the viewer or audience is fully immersed in their environment and can engage/interact with characters. The cue lines for rides sometimes provide an introduction to the story of the ride and can often be interactive experiences. An example would be The Wizarding World of Harry Potter Diagon Alley. Diagon Alley is a fully immersive environment where visitors can cast spells, get wizarding money, eat food, and go on rides. It’s apart of Universal Studios, and there are no signs that guide you to it if you know Harry Potter lore or just follow the flow of traffic you can find it. When you enter, you can’t see other parts of Universal, its covered by tall old looking buildings. There is even a Dragon that breaths fire on top of one of the roofs, you can feel the heat at almost any distance. Themes parks are a great reference for 360° / VR narratives since audiences are placed in an environment that has a pre-existing story and narrative. This reference reminded me to keep the characters fairly close to the camera during integral scenes in my film.